How to Survive a Stock market crash

Believe it or not, since the millennium we have had 14 instances of what could be called a stock market crash.  Some of the most memorable include the dot com bubble of 2000, the 9/11 disaster in 2001, the financial crisis of 2008 and now the one we are currently experiencing, brought on by the coronavirus outbreak and an oil price war.

You may ask, if these occurrences are so regular, why would anyone want to expose themselves to such turbulence and suffer the emotional rollercoaster that comes with investing in the financial markets?  More importantly, for those that have money invested right now, I’m sure you are asking yourself and your financial adviser how you can best protect your money from these crashes?

The simple answer is that you can’t protect yourself from them unless you are able to predict the future.  Market corrections and stock market crashes are part and parcel of investing your money and almost always take people by surprise.  No-one could have prepared for what happened when a group of radicals decided to fly 2 planes into New York buildings in 2001.  Likewise, it took the collapse of the Lehman brothers in 2008 to bring to light the real issues in the sub-prime mortgage market that eventually led to the Governments bailing out the banks.

The key, for most investors, is to ensure you have followed a couple of basic investment principles such as:-

But what do you do when a market correction (or crash) occurs?

One of the best ways to answer this is to analyse what’s happened to the markets over the last 20 years.  In the chart below I have pointed out the corrections since 2004 and how they have affected the Aggressive index, the Balanced Index, the Cautious Index and how they relate to inflation as well as the Bank of England Interest rates. 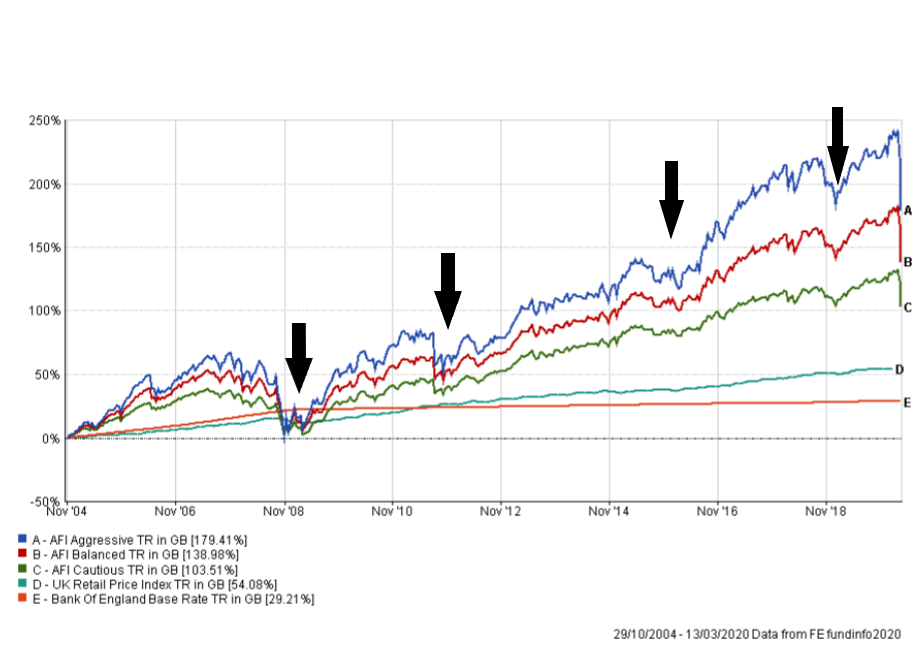 There are 2 key issues in this chart that I’d like to bring your attention to.

One is the fact that, despite 5 corrections (includng the current one) the returns from all 3 investment sectors are comfortably higher than inflation and interest rates.  This answers the question above of why would someone bother investing in the first place.  If you want your money to lose value over time, leave it all in cash and then compare the returns to the rate of inflation.  The chart above shows that the Bank of England interest rates are around 50% lower than the Retail Prices Index since 2004.

The second issue is how the markets have reacted AFTER the fall.  The 2008 financial crisis was followed by equally sharp returns in 2009.    The fall in 2011 was recovered within the year and the sell off in 2015, which wiped $10 trillion off global markets, ushered in another 3 year bull market.

So, if history is going to repeat itself, it seems that the worst thing you can do is exactly what your emotions are telling you to do – which could be to sell now and wait for the markets to rise.  This will crystallise your loss and then you have to be extremely talented (or lucky) to know when the markets have reached the bottom.

Another reason for not selling is that the current crash has not been caused by mis-management of funds or a substantial overpricing of funds (though one would argue that some form of correction was due).  This episode has largely been caused by factors outside of the capitalist market control – an illness affecting the movement of goods and people on a (hopefully) temporary basis.  As long as Governments manage the situation as well as possible then trade will continue as well as possible and so, when normality returns, we are likely to see fear removed from the market place and a rebound in prices.  The challenge for everyone is to make sure that they are correctly positioned when it comes – AND to be confident in holding your positon until it comes!

Finally, let’s put this into context.  The chart below shows the same sector returns over the last 12 months (upto Sunday 15th March).  You can see that the markets have been alarming this month.  When you compound this with the psychological law of ‘loss aversion‘ (where psychologists have established that the pain of loss is usually twice as painful than the joy of gaining) it’s understandable why people are worried.  However, it has been preceeded by 11 months of generally good returns.  If you measure the returns over 2 weeks you will have a feeling of ‘crisis’.  However, if you measure them over 12 months the emotions will probably drop to a manageable level of ‘disappointing’. 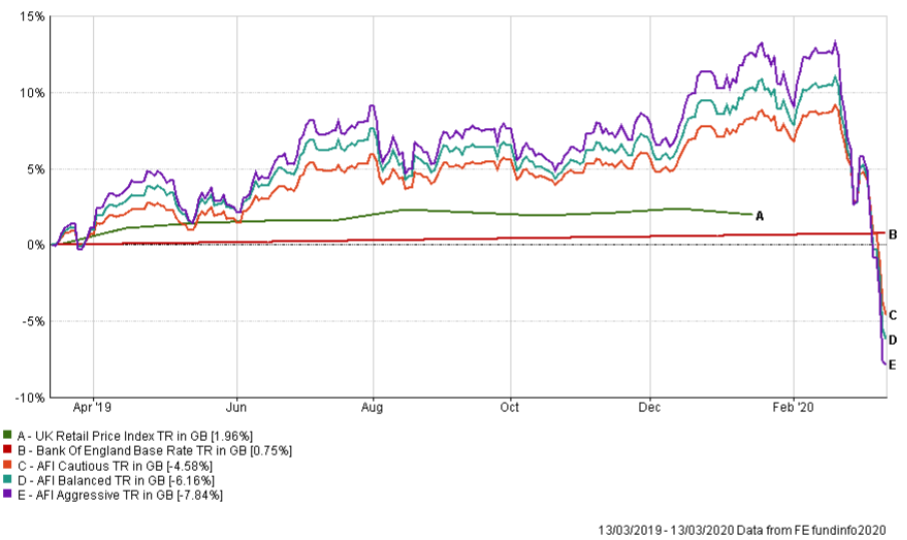 Whilst this may be sugar coating the situation, the framework and contexts we use to make decisons are imprtant.

No-one really knows what will happen in the short term but markets generally rise in the medium to long term.  They are also more predicable in the long term.

Markets generally rebound AFTER a crash so try not to be out of the market when they do.

Be careful who you listen to and take advice from.  Don’t listen to the media who will delight in telling you that the markets have suffered major setbacks this last 2 weeks but will not tell you when a recovery starts.

DO talk to your adviser if you are still concerned.

Try not to sell your funds to buy non-emergency and expensive assets. 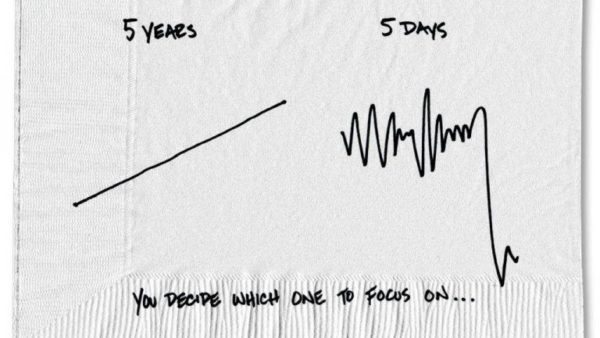 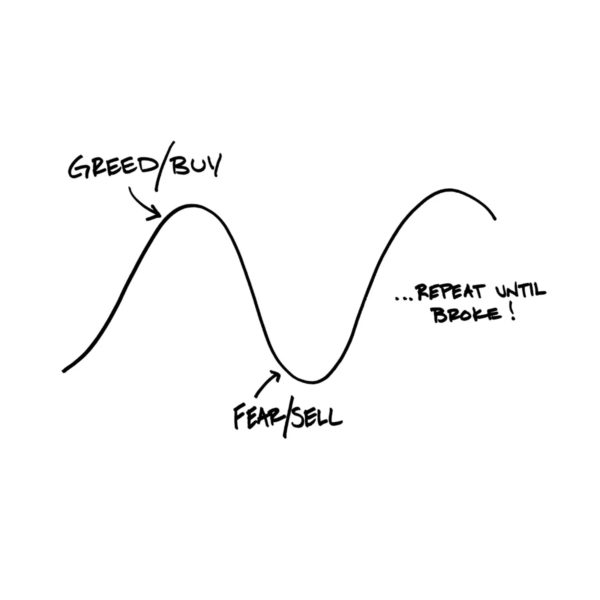 About the Author: Brian Butcher

Brian Butcher is a Director at Ideal Financial Management Ltd and has been giving financial advice for over 25 years. He is also the Author of ‘10 steps to Financial Success - how to get the best life you can with the money you’ve got’ Available on Amazon at https://www.amazon.co.uk/10-Steps-Financial-Success-money-ebook/dp/B00DQYD5LS